Lord have mercy on me, a sinner 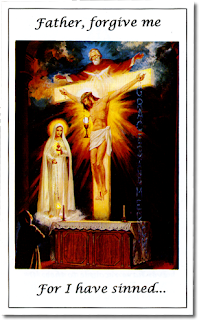 I’m in my 40s. That’s over 16,000 days on Earth. At 2 sins a day from the time I was old enough to know better,  that’s no less than 20,000 sins.  I’m sure the average of 2/day is pretty generously low, as we've probably all had days that we committed more than 2 sins, and other days, maybe less. They may be sins of action or inaction, maybe minor, maybe major.  With that many, they were surely repeated over and over.
I wouldn’t be surprised to find people skeptical of my conversion (reversion, perhaps?) to the Catholic Faith.  After all, look at me! I could name off all my weaknesses and sins more rapidly than anyone else could, other than our Lord.  He alone knows the true depth of my sin, but His Love is deeper than that depth of sin. I pray often to seek that Love, to know that depth of His Love for me and for us. Infinitely.  My life is far from perfect, but His Love for us is Perfect.  I think it’s very important for us sinners to share His Word and Love.

I can hear the accusation: Chris, you’re a SINNER. Who do you think you ARE to deserve, let alone share, God’s Love, Joy, Mercy?  You are not worthy.  That’s quite true. I could never be worthy.  A lot in me has changed since February 6th. I’ve truly repented and been forgiven. But what better way for God to show us that each of us has the opportunity to know Him, to love Him, to be close to Him than to redeem publicly a well known sinner?  If God can love, forgive even the most hardened of sinners if they come to Him, He will accept any of us!  If He works through someone who has sinned greatly and publicly, like a murderer (which I’m not), or a disgraced politician (also which I’m not!), I believe it’s to show us the extent of His Mercy and Love. Is it hypocritical to sing praises to the Lord when we are sinners? Each of us has sinned and fallen short of the Glory of God (Romans 3). If I fail and sin, does that make me a hypocrite? I don’t think so. If we are trying, even when we make a mistake, if we ask for forgiveness with the intent not to sin again, that is moving forward.  Should we be beholden to our past? I daresay each of us have done things or thought things or said things that we wouldn't want to be plastered on the front page of the newspaper or internet. Should I hold that against you if you have repented? If the Lord has forgiven someone, what right do I have to withhold my forgiveness? I may still choose not to like or be around that person. But I do have to love them, forgive them. That’s so hard!

It’s easy to see a Priest, Pastor, Nun, Deacon or someone else that we may place on a pedestal, how they are ‘holy’ men or women of God.  But Jesus Christ did not come to earth to preach to the ‘choir’. Take the sinful woman HERE.
42 When they were unable to repay, he graciously forgave them both. So which of them will love him more?” 43 Simon answered and said, “I suppose the one whom he forgave more.” And He said to him, “You have judged correctly.”
She had sinned greatly but realized the Greatness of Jesus, and sought His forgiveness.  He gave it to her. Take Saul...Paul. He persecuted the Disciples of Christ. He wanted to kill them! Yet our Savior came to him and led him to the right path.  He had no faith! He had no love for the Lord! But he accepted the Lord when God appeared to him.  He knew.  Is there a greater sin than to persecute the Lord?

There was Matthew, a tax collector; many of us feel persecuted by tax collectors, even today.  Perhaps even those Jesus raised from the dead did not believe before they died. But through Him, He saved their lives, both physically and spiritually.  If we have to choose between being saved physically or spiritually, which is better? Spiritually, of course! Jesus physically suffered to save us spiritually.  He suffers spiritually now when we sin. Yet His Forgiveness and Love reign forever, if only we seek it.  The Bible is full of both sinners and saints. But who were those saints? They were also sinners. You can’t open the Bible without reading about sinners. Yet Jesus loves us all. Accept that Love with all your heart.

Listen closely to the sinners who have come to our Lord.  They are well aware of their unworthiness. But what better way to share the news than to say, “God loves me, a sinner! God forgave me, a sinner!  Here are my sins, yet He still wants ME, of all people! Share in this joy I have found!” Now THAT should be front page news.

Being loved, being forgiven, being Christian doesn't mean I’ll never sin again. It does mean that I’m human.

Luke 7:36-50
New American Standard Bible (NASB)
Parable of Two Debtors
40 And Jesus answered him, “Simon, I have something to say to you.” And he [d]replied, “Say it, Teacher.” 41 “A moneylender had two debtors: one owed five hundred [e]denarii, and the other fifty. 42 When they were unable to repay, he graciously forgave them both. So which of them will love him more?” 43 Simon answered and said, “I suppose the one whom he forgave more.” And He said to him, “You have judged correctly.” 44 Turning toward the woman, He said to Simon, “Do you see this woman? I entered your house; you gave Me no water for My feet, but she has wet My feet with her tears and wiped them with her hair. 45 You gave Me no kiss; but she, since the time I came in, has not ceased to kiss My feet. 46 You did not anoint My head with oil, but she anointed My feet with perfume. 47 For this reason I say to you, her sins, which are many, have been forgiven, for she loved much; but he who is forgiven little, loves little.” 48 Then He said to her, “Your sins have been forgiven.” 49 Those who were reclining at the table with Him began to say [f]to themselves, “Who is this man who even forgives sins?” 50 And He said to the woman, “Your faith has saved you; go in peace.”