The Catholic Church has a direct succession of Popes, going back directly to Simon Peter, our first Pope, and the one Jesus chose as the rock of the Church.

Perhaps his greatest sin was when Jesus told him what his sin would be, yet Peter told Jesus that wouldn't happen.

Would you say 3 times that you didn't know this man, especially so quickly and in succession? This man, who you know is your Savior, your Lord, and you claim not to know Him.  Actually, each time we sin, we are denying that we know and love Him.  When we ask forgiveness and offer repentance, we are saying we love the Lord more than ourselves, more than our sins. We are accepting Jesus Christ, proclaiming Him our Lord and Savior. 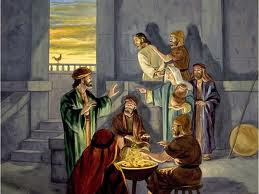 54 Having arrested Him, they led Him away and brought Him to the house of the high priest; but Peter was following at a distance.
55 After they had kindled a fire in the middle of the courtyard and had sat down together, Peter was sitting among them.
56 And a servant-girl, seeing him as he sat in the firelight and looking intently at him, said, “This man was with Him too.”
57 But he denied it, saying, “Woman, I do not know Him.” 58 A little later, another saw him and said, “You are one of them too!” But Peter said, “Man, I am not!”
59 After about an hour had passed, another man began to insist, saying, “Certainly this man also was with Him, for he is a Galilean too.”

60 But Peter said, “Man, I do not know what you are talking about.” Immediately, while he was still speaking, a rooster crowed.
61 The Lord turned and looked at Peter. And Peter remembered the word of the Lord, how He had told him, “Before a rooster crows today, you will deny Me three times.”
62 And he went out and wept bitterly.

What did Jesus do? Did He turn against Peter? Did He condemn Peter to Hell? No. He forgave him, and upon this rock, built His church. In earlier verses (remember, Jesus already knew that Peter would deny Him, since He is God) :

Matthew 16:17-19
And Jesus said to him, “Blessed are you, Simon [k]Barjona, because flesh and blood did not reveal this to you, but My Father who is in heaven. 18 I also say to you that you are [l]Peter, and upon this [m]rock I will build My church; and the gates of Hades will not overpower it. 19 I will give you the keys of the kingdom of heaven; and whatever you bind on earth [n]shall have been bound in heaven, and whatever you loose on earth [o]shall have been loosed in heaven.”

So, this man, who committed perhaps the greatest sins of His life right in front of Jesus, was forgiven.

There was also the apostle, St. Thomas. 'Doubting Thomas' so might know him.  While he didn't deny knowing the Lord, he denied believing in Him, when others told him that Jesus had risen from the dead.  He wanted to see with his own eyes and touch Him with his own hands.  Then He believed.
http://www.biblegateway.com/passage/?search=John%2020&version=NASB

19 So when it was evening on that day, the first day of the week, and when the doors were shut where the disciples were, for fear of the Jews, Jesus came and stood in their midst and *said to them, “[b]Peace be with you.”
20 And when He had said this, He showed them both His hands and His side. The disciples then rejoiced when they saw the Lord. 21 So Jesus said to them again, “Peace bewith you; as the Father has sent Me, I also send you.”
22 And when He had said this, He breathed on them and *said to them, “Receive the Holy Spirit.
23 If you forgive the sins of any, their sins [c]have been forgiven them; if you retain the sins of any, they have been retained.”

24 But Thomas, one of the twelve, called [d]Didymus,
was not with them when Jesus came.
25 So the other disciples were saying to him, “We have seen the Lord!”
But he said to them, “Unless I see in His hands the imprint of the nails, and put my finger into the place of the nails, and put my hand into His side, I will not believe.”
26 [e]After eight days His disciples were again inside, and Thomas with them. Jesus came, the doors having been [f]shut, and stood in their midst and said, “Peace be with you.” 27 Then He *said to Thomas, “Reach here with your finger, and see My hands; and reach here your hand and put it into My side; and do not be unbelieving, but believing.” 28 Thomas answered and said to Him, “My Lord and my God!” 29 Jesus *said to him, “Because you have seen Me, have you believed? Blessed are they who did not see, and yet believed.”

Why This Gospel Was Written

30 Therefore many other [g]signs Jesus also performed in the presence of the disciples, which are not written in this book;
31 but these have been written so that you may believe that Jesus is [h]the Christ, the Son of God; and that believing you may have life in His name.

It's not a sin to have questions, or even doubts. But not all questions have answers; not all doubts are well-founded.  That's where Faith steps in; we believe. Not just because of the thousands, millions of miracles and signs that we see occur every day, but because of those we don't see as well.